Cardamom, (Scientific Name: Elettaria cardamomum (Linn.) and family: Zingiberaceae) popularly known as the “Queen of Spices” and is one of the most expensive spices in the world, due to its delicate aroma. In India, Kerala accounts for 60 % of the cultivation and production followed by Karnataka 30% and Tamil Nadu 105%. Common varieties are ICRI-1, ICRI-2, Mudigree-1, PV-1, SKP-14 etc.

Package of Practices for Cultivation of Cardamom

Cardamom is propagated mainly through seeds and also through suckers each consisting of at least one old and a young aerial shoot. Seedlings are normally raised in nurseries and about 10-18 months old seedlings are used for planting in the field. For its plantation, pits of 45x45x30cm size are dug in April-May and filled with a mixture of topsoil and compost or well -decomposed farm yard manure. One kg of seed capsules may produce 5000 seedlings. Sowing may be taken up during November – January and is done in rows.

Cardamom responds very well to organic and inorganic fertilizers. A dose of 75:75:150 kg NPK/ha should be applied. Organic manures like compost or cattle manure may be given @ 5 kg/clump. Fertilizers are applied in splits under rainfed conditions in May and September. weeding is to be carried in May-June, the second in August-September and the third in December-January. Weedicides like paraquat @ 625ml in 500 liters of water may be sprayed in the interspaces between rows leaving 60cm around the plant base.

Cardamom comes to bearing 2-3 years after planting and the fruits mature at 30:40 days intervals, necessitating 5-6 pickings. Harvesting season is October-November.  Ripe capsules are harvested in order to get maximum green color during curing. After harvest, capsules are dried either in fuel kiln or electrical drier or in the sun. When drier is used, it should be dried at 45-50o C for 14-18 hours, while for the kiln, overnight drying at 50-60 o C is required. The capsules kept for drying are spread thinly and stirred frequently to ensure uniform drying. They are then sorted out according to size and color, and stored in black polythene lined gunny bags to retain the green color during storage.

Today cardamom commands a leading position among the spices of immense commercial importance and is finding its way into the dietary habits of millions around the world, even among people on the European and North American continents, hitherto unaccustomed to its use. 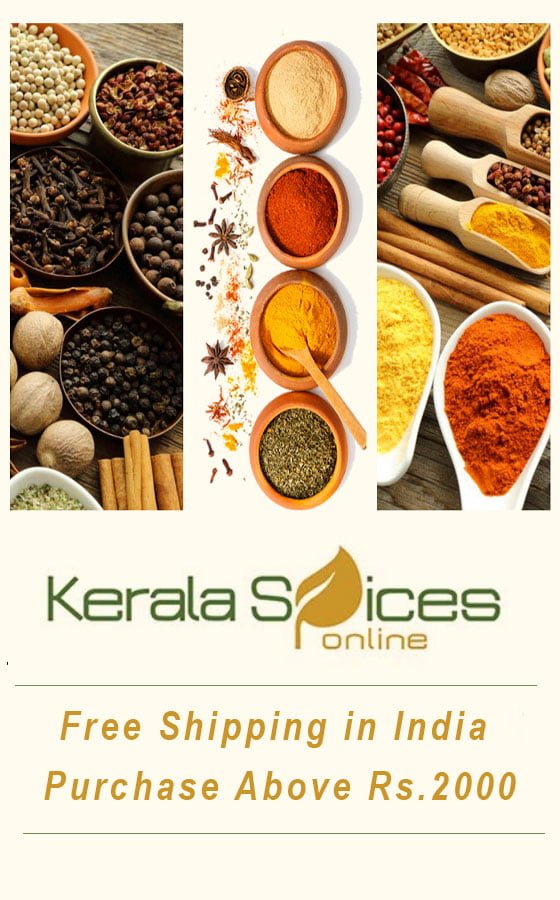 Shipping across India at free